when audio is added to security

Movies with synchronized audio became the commercial standard in the 1930’s. Yet video used for security and present everywhere is largely silent today, despite the fact the basic capability is built into cameras and recorders to provide audio. Does this have to be the case? No, as long as the same regard for civil liberties long observed with video surveillance governs its application. When properly applied, supplementing video recording with audio recording can help deter, detect and document events to everyone’s advantage – except the criminal’s.

The ethical and legal aspect

As a business may declare a conversation with a customer is being recorded in support of quality service, this same type of consent – expressed or implied – needs to occur with audio surveillance. This can be done with signage the same as with video. It can be written into employee agreements as a component of their interaction with the public representing the company. One needs to consult the laws in each state. Below are two links to well-maintained websites on this subject:

A state by state review indicates a dozen states require consent of both parties involved in the conversation. Many states with single party consent requirements still prohibit such eavesdropping if it is in support of criminal acts. Also in public settings a distinction is sometimes made if the detection capability exceeds that of the normal person with his ears in a public place. If in doubt of a specific application seek legal counsel.

What are some audio recording applications?

Intercom technology is such an accepted version of what we are discussing that we sometimes forget to consider it. It is well designed to ethically capture audio conversations and is usually at a public entrance. The visiting party typically initiates a request for conversation with the push of a button. The resident responds from an internal station as well to initiate the conversation. This is a perfect instance of two party implied consent for listening. [Of course if it is arranged to record these conversations for review proper notification should precede them as discussed above]. Intercom technology continues to be embellished and now mobile apps enable a user to mimic an internal station by use of a smartphone to address and admit the visitor.

A well designed video and alarm system integration might include audio at main entrances if it is likely there may be a need for conversation by the monitoring party. Two way audio via the camera with internal or added speaker microphones could enable a responder to speak with the visitor as needed. This is in essence a virtual video intercom although one party may be at a remote monitoring center timezones away.

An example of this may be at a gas station with a public attendant. Video and audio may be recorded to insure proper customer service and the protection of the employee from harm or even false accusation. In such cases there should typically be signage posting the likelihood of recording and the employees should also be notified and give consent.

Large commercial transactions where many important documents are explained and signed are sometimes video and audio recorded and the recording is included in the documents.

Monitoring centers may offer a variety of services involving video with two way audio. These can include emergency services where there is communication in support of providing responders to an active shooter event. Another example might be an unattended site where monitoring personnel follows scripts to advise the potential customer of what is possible in the absence of someone locally present and responds to basic questions.

The IP topology of video surveillance also supports distributed detection of sound via the camera for event analysis. Building on the prior development of dedicated glass break detectors or urban city shot detector systems, now audio transmitted back along video management systems can be analyzed to help detect important security events such as gunshots, glass breaks and/or car alarms. Even indications of aggression in human voices can be monitored.

How is audio added to video surveillance technology?

Today an audio assisted surveillance system would include the basic components shown in the diagram below: 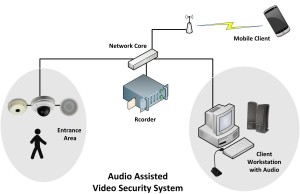 Many IP cameras will now support audio. The cameras may support line in audio or even microphone inputs as well as line output of audio. Some are equipped with microphones or even speakers built in. Generally when this is the case they will also allow external devices to be used instead.

Just as H.264 is the dominant standard in video transmission for video system management, G.711 is the audio counterpart. It is an old standard released in 1972. It was developed for telephony to provide toll-quality audio at 64Kbits per second. By comparison your digital music recordings such as from an ipod or smartphone might be 256kbits which provides a richer sound. A few video management systems accommodate higher bitrate recording but for the most part the telephony standard G.711 is the level of quality supported by cameras and video management systems (VMS). Also, just as with video, one needs to insure that the VMS driver accommodates the specific camera’s audio features.

A decade ago audio capability had largely been stripped from video security systems. Today more video security devices, specifically IP cameras and management software accommodate the addition of audio capability.
If properly applied within legal and ethical bounds, audio can enhance what is possible with a distributed IP based video security system. Conversations can occur with people at remote locations and important events can be more fully documented. Even nonverbal indicators of aggression and crime can be monitored for greater detection and response. Today audio should be seriously considered when evaluating security systems and upgrades.■