Have you or an acquaintance ever experienced either of the following two situations?:

1) Walking out to a darkened parking lot in a bad neighborhood with concern but your nervousness subsides some when you see surveillance cameras in operation.

2) You decide to block that little dot at the top of your laptop – just to be sure video isn’t being taken without your knowledge.

These are the flip sides of video surveillance today. One the one hand we appreciate that it can preserve well-being. But on the other hand we worry about the invasion of privacy that is increasingly more possible thanks to evolving technology.

Discussion on where to draw the line is frequent today. This is a brief article to illustrate what the underlying legal issues are which have guided decisions as to the proper use of commercial surveillance. Security technology is amazing and continuously improving to protect person and property.

Even so, security designers, providers and end users all need to regularly revisit the framework of how personal liberties are to be protected as technology develops. [This article is intended for general information, it is always good to seek legal counsel for uncommon applications].

The guiding legal constraint on surveillance stems from the concept of a ‘reasonable expectation of privacy’. The Fourth Amendment to the Constitution which guarantees’ the right of people to be secure in their persons, houses, papers and effects against unreasonable searches’ is where this is established in the US. The further definition of what the amendment protects was formulated in Justice Harlan’s opinion in Katz vs the US. Two conditions are identified as necessary for this protection to have been violated:

1) A person has exhibited an actual expectation of privacy and,

2) The expectation is one that society is prepared to accept as reasonable.

As long as surveillance video is applied with sensitivity to these constraints, the use of the technology has been upheld legally.

The Massachusetts Supreme Court ruling in Nelson vs Salem State College (2006) illustrates how essential these conditions are even when surveillance is secretive. A woman changed in the back of an office with a large plate glass window in the front. She changed only when she thought no one was around but this activity was captured by a covert camera. The court held that there was no reasonable expectation of privacy in a public office with a windowed wall.

Similarly, camera video evidence against a maintenance worker who pilfered money from a teachers desk was upheld as legal in New Hampshire’s State vs McLellan. ATF was upheld when they, without warrant, secretly viewed and recorded a trailer for weeks when criminal activity was occurring (US vs Houston). Cameras in public areas where a person might reasonably be seen by another person are routinely installed and the legality of this is well established. In a sense the camera is a proxy for what a passing human being might observe.

But what if a critic argues that some activity may be publicly exposed to others but there is an assumption that it will not be surveilled? This has been found legally similar to the situation where a police informant reveals confidential talk. The wrongdoer may have assumed there was no risk of confiding in him but that mistaken belief is not in itself a protection (see as example Hoffa vs United States).

With video surveillance in general it is a good practice to post that the public premises may be under surveillance and recording. It also may make sense to write this into employee and client agreements. A daycare for example may want to video their care of the children in public areas as a protection both for the children and the staff. It’s always best to consult legal counsel on the wording of such agreements.

One related aspect involves technological enhancement of the surveillance. Is the technology readily available to the public who might use it enhance their own senses vs physical trespass? By this measure, high resolution and zoom video is no different than binoculars or telescopes. Illumination of an area not protected by Fourth Amendment constraints is similar to human use of a flashlight. Is the vantage point taken legally possible for a passerby? Then even a vantage point such as that possible by a lineman on a telephone pole is not a warrant-required search. This is the reasoning process in evaluating the correct use of surveillance.

PROTECTED USE OF RECORDINGS

The improper handling of recordings so they are distributed beyond a proper activity can be a violation of privacy. The distribution of body scans at TSA checkpoints to general personnel is one recent and well known area of concern.

What is often not appreciated is that In general practice modern video security is ahead of most technology in protecting access to private records. The video is password protected, the review and export of it can be audited. Because the files are so large a system is typically configured to automatically delete the oldest video to make room for current video. All this is routinely handled in a modern video management system as a basic feature. Private data is rarely handled with such care. As a contrasting example, businesses routinely expend money and labor to properly dispose of even general documents in a protected manner. Yet there are often spectacular failures.

WHEN AUDIO RECORDING IS ADDED

As a business may declare a conversation with a customer is being recorded in support of quality service, this same type of consent – expressed or implied – needs to occur with audio surveillance. This can be done with signage the same as with video. It can be written into employee agreements as a component of their interaction with the public representing the company. One needs to consult the laws in each state. See the references for sources on this.

A state by state review indicates a dozen states require consent of both parties involved in the conversation. Many states with single party consent requirements still prohibit such eavesdropping if it is in support of criminal acts. Also, in public settings a distinction is sometimes made if the detection capability exceeds that of the normal person with his ears in a public place. If in doubt of a specific application do seek legal counsel. 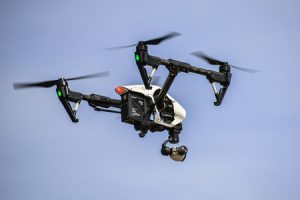 Emerging technology will require further consideration of the legal safeguards. Drones equipped with video and other sensors are a fascinating example. As one authority puts it, the technology is a ‘game – changer’.

Previous case law has upheld naked eye surveillance of property from a plane or helicopter in the prosecution of marijuana growing or industrial wrongdoing. In California vs Ciraolo courts even upheld that helicopter viewing into a greenhouse with missing panes was not an invasion of protected space. The test for proper surveillance involves both an expectation of privacy and the individual’s manifestation of it by the measures he takes. If drones regularly pass overhead at a frequency far greater than a helicopter what new concerns occur? How would someone indicate his expectation of privacy from such a pervasive presence?

What of the individual activity captured in a scheduled video guard tour by a drone? Or a video escort by drones? Will the overhead activity become so common that a claim to protection from what it views and records is seen as unreasonable? These are the questions which will continue, the very fact that these issues are thoroughly explored is a sign of the health of a society.

In most cases a reasonable expectation of privacy can be anticipated and met. Postings of possible surveillance can further protect all involved. While this article or the references are intended to detail the key elements to consider, one is always advised to review with legal counsel should they have any questions. Especially so with unique applications or emerging technology.■