how can access control protect more of your operations? consider wireless lock technology 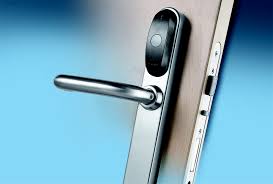 Physical Access Control is a strong tool for securing businesses and institutions, with such benefits as:

Security managers find themselves wanting to secure not only their perimeter but also other key areas of their enterprise. However the added cost can be prohibitive.

Conventional access control has been successfully deployed for several decades now. It typically features at least a two stage topology with direct wiring from intelligent controllers and power supplies to door hardware and sensors. Primarily the main entrances and exits of a building are secured. Security professionals often would like to extend electronic access control to interior doors and compartments and thereby secure vital data, items or personnel. Often the cost to implement per door seems prohibitive of this. [Fully featured access control systems can typically be budgeted at about $3000 per access door in the U.S.]. Drawing from wireless, encryption and battery technology developments providers have now crafted a more affordable alternative involving wireless locksets.

Wireless access control typically involves tightly integrated locksets which combine the electronic lockset, card reader, local intelligence, wireless receiver, door sensor, and batteries. These locksets are mounted with templates on the door in the location of conventional doorhandles. As many as 16 doors may be managed by the access control system via a single node which has to be located within a specified distance of the lockset for reliable communication. And these nodes – tethered by communication cable – can be distributed via network connection to the server as necessary to communicate with all wireless doors. Below is a depiction of the contrast between conventional and wireless architectures. 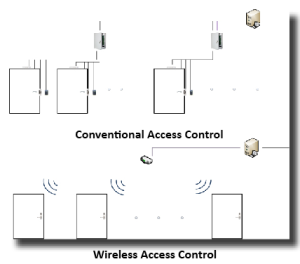 Compared to all the discrete hardware components required for door lock and access control these locksets are more cost effective. And the elimination of different connections wired to or through the door frame and hardware is a great labor savings. Typically all that is required is the lockset installation and wireless node network. The reduction of cost per door can be nearly ½ the cost of conventional.

With the option of access control many installations today extend access control to secure interior partitions, enclosures and drawers or in some cases remote locations within line of sight. Several suppliers have developed a wide array of locksets to cover the architectural breadth of door designs. Most of the mid-level and higher end access control system lines integrate with these wireless offerings in order to be able to extend supervision to additional less-traveled yet critical doors and locations within an enterprise.

There are significant variations as to how communication is implemented. Below is a table of some of the leading approaches.

SALTO’s SVN: A Data on Card ‘SneakerNet’
Salto’s SVN or SALTO Virtual Network (SVN) wire-free system is an offline virtual network which allows wireless access control to extend further to doors, lockers and drawers which can benefit from access control but do not require instant communication with the server. Essentially users provide the communications to each lockset as they encounter them, a “sneakernet” if you will. In such instances the cost of implementation can be as little as ¼ of conventional systems.

SALTO’s SVN system pushes and pulls credentials, privileges and other data onto RFID cards or fobs at common “hot spot” entry points which are conventionally wired to the access control server. As these credentials are used at various SVN doors, event and status data are copied on the RFID cards. This data is then provided back to the access control server and database once the card is again used at the hotspot entry point. The data transmitted via individual RFIDs does not need to be limited to information regarding the credential holder but can for example be used to provide SVN locks with notification that another user is eliminated from the system.

By careful configuration parameters such as entry point update requirements the SVN can reliably proliferate necessary communication within specified timeframes. This technology is also available in tandem with SALTO’s wireless technology in order to ensure various levels of communication update with each wireless door. The SVN can then also provide a backup to wireless communication.

Allegion Wireless
The Allegion Schlage AD series implements wireless access control over a 900 MHz spread spectrum. This technology has long been recognized as offering longer distance communication within building structures and is the preferred frequency for wireless intrusion device communications as well. In addition to their standard wireless door locksets Allegion exploits the outdoor line of sight performance of the technology by offering antenna accessories to boost the distance possible to 4000 feet. They also offer a unique portable reader which can be taken to a remote site, i.e. a manned athletics field gate or an emergency rally point and then communicate back to the premise electronics as long as the 1000 line of sight criteria is adhered to.

ASSA Abloy Aperio and Profile Wireless
Assa Abloy’s Aperio technology offers wireless technology based on 802.15.4 wireless communication. The locksets they provide include the PR100 and IN100 locksets, Medco M100, the HES K100 cabinet lock and the Adams-Rite A100 for glass and storefront doors. The Prestige line from Sargent implements similar function but over open Wifi b/g 802.11 technology. This eliminates the need for a separate communication network.

Salto Wireless and SVN
Salto has developed the XS4 Wireless RFID Technology for wireless access control which can most simply be implemented across their patented SVN ‘virtual network’ whereby the user’s RFID device maintains essential data and also carries it to and from doors to the SALTO system. SALTO has developed a full array of locksets implementing XS4.

If more immediate communication is needed an 802.15.4 network communication can also be implemented across almost all of these locksets (but not the lockers). The SVN can still serve as a backup medium for such locksets. A large number access control system providers have implemented integrations with the wireless communication XS4 version. Some have also included the SVN network via data-on-card. Both are also available with SALTO’s own access control system offering.

Conclusion
Wireless access control technology is now well established and extending access control into interior doors and vital storage areas due to the reduced cost and proven reliability. It introduces new considerations such as the need to replace locksets and conservative observance of all factors contributing to wireless distance limitations. Some of the other seeming drawbacks such as battery replacement and the need to observe mechanical degradation of doors are not unique to the technology, just manifested differently. The broad variety of locksets now available demonstrates how far application of this technology has developed. When next assessing security needs you may want to consider this new option.